For almost a year now I have been using the Sidewinder Ti-Tri from Trail Designs as my primary stove for my round the world bicycle trip. An alcohol stove with a twist, the Ti-Tri has become easily my favourite way to cook on the road. By combining it with a homemade pot cosy I have a cooking system that is extremely lightweight as well as highly efficient and versatile.

The Sidewinder Ti-tri system comes in two parts. First the burner, into which you pour your alcohol fuel. And second the cone, which serves as both potstand and windscreen, and which rolls away small enough to nest inside the pot for storage. Because of the shape of the cone and the way the air holes are placed, heat is circulated with incredible efficiency, making for a system that cooks faster yet uses far less fuel than other alcohol stoves.

Setting up the cone is simple. You pull it out of its protective sleeve and slide together the joints. Pour some alcohol fuel into the burner, light it and put the cone on top. Then drop your pot in and you’re good to go. I find the setup to be very fast and simple, with none of the priming needed with liquid fuel stoves, and it's great that the whole thing can be so easily stored inside the pot.

For my first year of touring I carried a liquid multi-fuel stove, the MSR Whisperlite, which I ran on unleaded petrol (aka. auto gas if you’re American). It worked fine and has the advantage of petrol being readily available literally everywhere in the world. By the end of the year though I was fed up with it. Priming (pre-heating) the stove had become a bother and I was fed up with the smell of petrol as well as the sooty hands and maintenance which are inevitable with petrol stoves. My search for an alternative led me to alcohol stoves (ie. methylated spirits, not vodka), which have various advantages (and disadvantages) over gas or liquid fuels. Gas stoves are often loud, and gas is expensive outside of Western countries (if you can find gas canisters there that fit at all) so although I might consider a gas stove for a trip exclusively in the West, for a long intercontinental trip on a budget I don’t think it’s the way to go.

Alcohol burns cleanly, burns silently, and is cheaply available almost everywhere in the world. Alcohol stoves are also incredibly simple so there is really nothing to go wrong, and no cleaning or maintenance required. You are simply pouring the fuel into the burner and setting fire to it, no clever technology needed. No moving parts and so nothing that can break. I really do like the simplicity of cooking with alcohol.

So why get the Sidewinder Ti-Tri instead of one of the many other alcohol stoves already on the market or even just making yourself a beer can stove? Simply put, the Ti-Tri is just a lot better, lighter and more convenient than the others. The main disadvantages of alcohol stoves are that they take longer to boil water, use more fuel and tend to struggle in windy conditions. The fantastic design of the Cone goes a long way to eliminating all three of these drawbacks.

The design of the cone results in significantly faster boil times than pretty much any other alcohol stove around. When you factor in setup time (and the time it takes to prime a multi-fuel stove) I find the Ti-Tri to be only ever so slightly slower than my old MSR Whisperlite, and much faster than any other alcohol stove I’ve ever tried. Fuel efficiency is also incredible, especially when combined with a pot cosy. Cooking once or twice per day (and in conjunction with with a pot cosy) I get more than a months use out of just 1 litre of alcohol fuel. As for wind, the Cone is its own windshield so it functions well even in strong winds. On a few occasions I’ve noticed slower boil times under very gusty conditions, but it has always got there just fine.

The Ti-Tri is also extremely light; the whole thing together weighs in at only a little over 100 grams, and everything fits comfortably inside my pot for easy packing. I’ve been using the new Trail Designs Kojin burner and it’s been fantastic – once I’m done cooking I can simply blow out the flame and put the lid straight on, further conserving fuel and meaning I don’t have to worry about pouring in too much and wasting it. The whole experience of cooking with the Ti-tri system is just very pleasant and straightforward, and is easily the nicest way I have found for cooking on the road.

Ultralight equipment tends to sacrifice in durability so I was initially concerned about how long it might last, but after more than a year of hard use the cone is still going strong. I once made the mistake of carelessly standing on the lid of the burner which bent the side slightly but it was easily pressed back into shape and still screws tight to keep the alcohol stored securely inside without any leaking. The cone itself looks a bit weathered as you’d expect after many hundred uses but the joint still works perfectly and it is functionally good as new. The ‘Sidewinder’ style cone which lets you store the cone inside your pot is fantastic as it keeps it well protected against damage. In fact the only part of the whole system which has worn out at all is the protective Tyvek sleeve for the Cone, which started to fray and developed holes at the top and bottom where it folds over. This was easily fixed with some gorilla tape and the sleeve still works fine. I do currently carry a backup stove, the MSR PocketRocket 2 (a gas stove weighing in at around 70 grams) as there are still a few parts of the world where alcohol fuel isn’t available, such as the Middle East and North Africa. I was glad to have a gas stove as a backup there as I couldn't find any alcohol, but I was definitely looking forward to reaching Kenya so that I could get back to cooking with alcohol as I do much prefer it. The PocketRocket 2 is a great stove but it’s loud, less stable and just not as pleasant to use.

It is also worth mentioning that the Ti-tri can be used not just with alcohol, but also to burn Hexamine tablets (eg. Esbit), though I've never done this myelf. Because it's made from titanium it can also be used as a wood burning stove, and this feature can be augmented by purchasing the optional 'Inferno' add-on. I use mine primarily with alcohol since it's so readily available, but it's nice to know that in a pinch I can also burn wood if I have to. Yes, you could always make a regular fire, but wood burning stoves use far less fuel and are much more efficient than cooking on an open fire when wood is scarce. 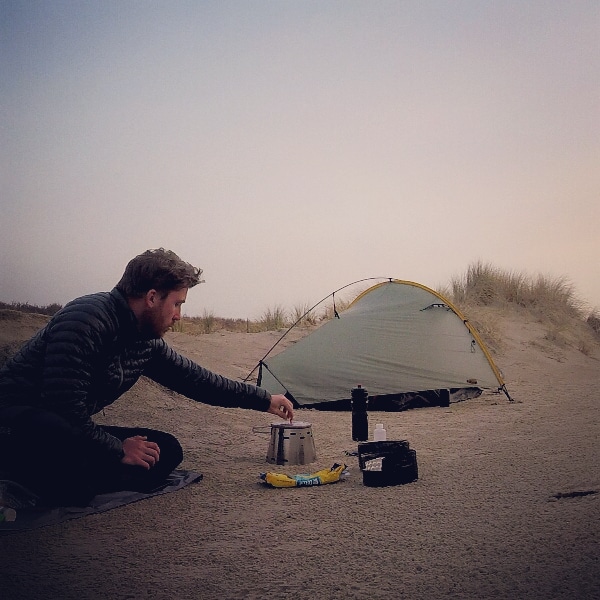 Nothing is ever perfect of course. Although the cone is still good as new, the Kojin burner no longer functions anywhere near as well as it did for the first year, taking much longer to boil water and using more fuel, to the extent that I've actually stopped using it in favour of a homemade beer can burner which I made in Kenya. My suspicion is that the absorbant material inside the Kojin, which Trail Designs calls 'batting', went mouldy during the few months when I wasn't using it.

Although my beer can burner (used inside the cone) works fine, it's nowhere near as efficient or convenient as the Kojin was so I'll definitely be picking up a new Kojin as soon as I can. It only costs $12 for the burner so it won't break the bank. Although the Kojin failing isn't ideal, it lasted a good year of daily use so I can't really complain, and even if it does fail you can always buy a beer and make yourself a functioning burner to tie you over until you can replace it.

One thing to note about the Kojin is that on a few occasions it caused a fire to break out on the actual ground surface, which once resulted in an unsightly charred black circle on a wooden park bench which I felt rather guilty about. I'm not sure why this happened, maybe some of the fuel leaked out, but in any case I started using a circular piece of aluminium foil (taken from a disposable barbecue) under the cone to prevent this.

Perhaps its biggest drawback is that because the cone is custom sized to a specific pot, you cannot use multiple pots of different sizes with the same cone. This is not a problem for me as I only want to be carrying one pot anyway, but for people looking to carry extra pots or a frying pan, this could be a dealbreaker. As far as negatives that's about all I've got though. Any other criticisms that might be leveled at the cone are more criticisms of using alcohol for cooking in general, but I find the Cone offsets these wonderfully and there's no doubt at all in my mind that it's the best alcohol stove on the market.

Thinking in terms of equipment my measure tends to be asking myself the question – ‘if I lost this item today, would I go out and buy exactly the same thing again tomorrow or would I be looking around for alternatives?’ With a lot of my gear I’d be trying something new, but not so with my cooking system – I’d take exactly the same thing again without hesitation, and that’s the highest recommendation I can give it. It really is a fantastic piece of kit!